The Corner Panzió is a great place for both, the food and the view. Located at the Danube and within the Old Town of the picturesque Szentendre, only 20 kilometers in the north of Budapest’s Center, this restaurant (Etterem) marks a perfect starting point from where you easily explore the other parts of the Old Town, I have been many times to. The food is delicious and range from traditional Hungarian to many Serbian dishes.

We ordered the Serbian Mixed Meat Plate for two people to taste many Serbian delicacies at once. Unlike its homepage the Corner Panzió offers its menu card in several languages, what makes it easier for foreigners, since the menu is quite long and there are many dishes to choose from. For the drinks we ordered a yummy Radler, meaning a Shandy with half lemonade and half beer.

The owner and his staff is very nice and willing to help. And the sunny patio with its many tables is on a big square and features two great views, one view onto the Danube, and the other view into the Old Town. Inside the restaurant there is a special feature, what makes it quite interesting to stay inside as well, as this place features many small bank notes from various currencies above its corner and on the wall.

But see it for yourself: 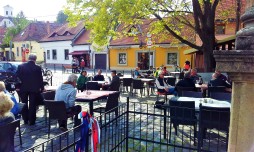 The patio of the Corner Panzió with its many tables 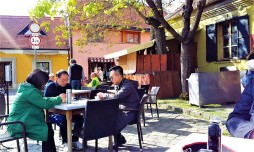 The Radler – a Shandy, half lemonade and half beer

The Serbian Mixed Meat BBQ Plate for 2 people. with a spicy red salsa called Ajvar and fresh onions with a cucumber salad with sour cream…very yummy 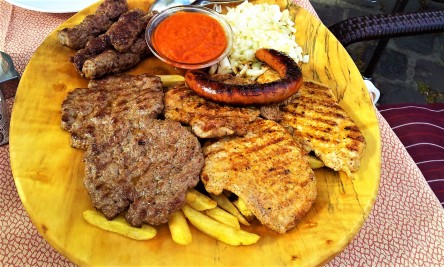 The Close-up of the Serbian Mixed Meat BBQ Plate for 2 people. with a spicy red salsa called Ajvar and fresh onions…very yummy

The close-up of the cucumber salad with sour cream

And here is the famous slide show:

The Bottom Line: The Corner Panzió, located at the Duna korzó 4, in Szentendre, is a great restaurant right at the Danube in the Old Town of Szentendre. The food is great and so is the view in the patio. 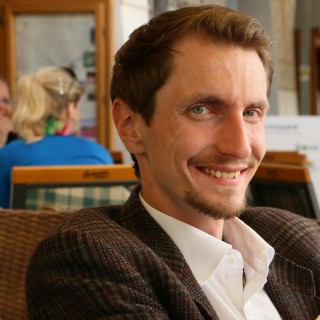